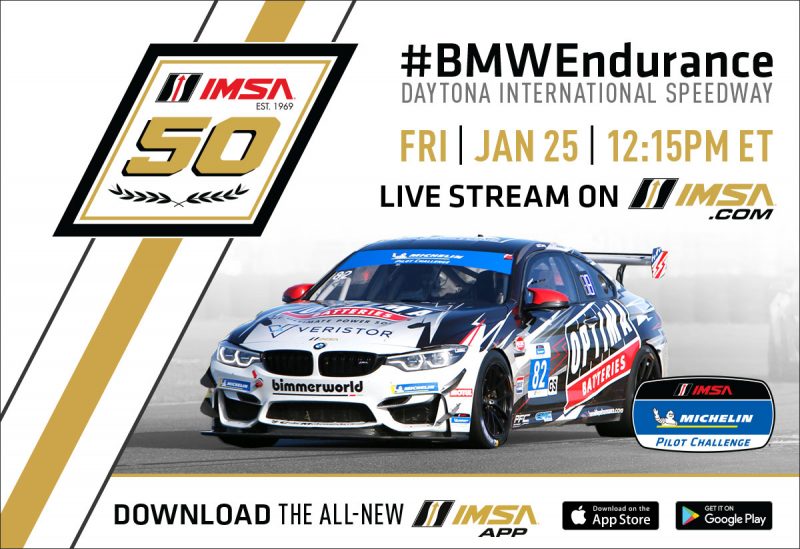 Though it might feel as though we’re stuck in the depths of winter, there is hope for brighter days ahead, because the 2019 racing season officially kicks off this Friday (January 25) with the IMSA MICHELIN Pilot Challenge Series BMW Endurance Challenge at Daytona!

Forgeline is a proud partner of the MICHELIN Pilot Challenge Series. And for 2019, we’ve expanded our support of American road racing with a stronger presence on the IMSA.tv live streaming and IMSA Radio broadcasts of all 2019 MICHELIN Pilot Challenge races. Our support of the race coverage enables race fans around the globe, many of whom may not be able to attend each race in person, to continue enjoying some of North America’s best sports car racing.

In addition to supporting the MICHELIN Pilot Challenge series and race media coverage, Forgeline is also proud to be the wheel of choice on a large number of the MICHELIN Pilot Challenge GS field competitor vehicles. The one piece forged monoblock GS1R (known by some as the “fastest wheel in motorsports”) is utilized by many of the top GS teams, including the Ford Mustang GT4s from KohR Motorsports, Multimatic Motorsports, & PF Racing, and the Chevrolet Camaro GT4.Rs from Rebel Rock Racing.

“Forgeline is proud to be expanding its strategic alliance with IMSA,” said Steve Schardt of Forgeline Motorsports (who also happens to be a passionate race fan and competitive amateur racer). “Watching the series grow has been incredible, and we want to help even more fans enjoy this level of competition. Plus both Forgeline and IMSA are celebrating anniversaries, in 2019; 25 years for Forgeline and 50 years for IMSA. And in Forgeline’s 25 years of operation, we’ve always been involved with the series, so expanding our involvement with IMSA, during our anniversary year, just makes sense.”

“Forgeline has been an enthusiastic member of the IMSA paddock for many years, and we are pleased to see the relationship expand this season,” said IMSA Vice President of Marketing, David Pettit. “As Steve mentioned, our 50th Anniversary Celebration is a cornerstone of our 2019 season, and it is through the support of companies like Forgeline that we have a reason to celebrate.”