The 2019 race season kicked off in grand fashion, with the MICHELIN Pilot Challenge Series BMW Endurance Challenge at Daytona, on January 25. And in addition to the excitement of the race itself, this event also marked the awarding of the very first Forgeline Spirit of the Event award, which was decided by fan vote and given to the driver who who best exemplified the true spirit of MICHELIN Pilot Challenge racing.

Fans who enjoyed race day coverage via the IMSA.tv live stream and the IMSA Radio live broadcast submitted their votes via Twitter and selected Kris Wilson, driver of the GS-class Automatic Racing #99 Aston Martin Vantage as the inaugural winner. Kris’ Aston Martin Vantage is the oldest platform in the GS field, but his persistence and determination (along with that of his Automatic Racing teammates) allowed him to hold off the faster Audis and McLarens on his way to a second place podium finish!

Congratulations to Kris and the Automatic Racing team for earning the first ever Forgeline Spirit of the Race award!

The MICHELIN Pilot Challenge Series returns to action again at Sebring International Raceway with the Alan Jay Auto Network 120, on Match 14. Fans who tune in to the IMSA.tv live stream and IMSA Radio broadcast will get another chance to submit their pick for the Forgeline Spirit of the Event award by tweeting their choice to @IMSARadio using the hashtag #ForgelineSOTR. 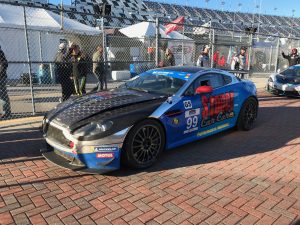