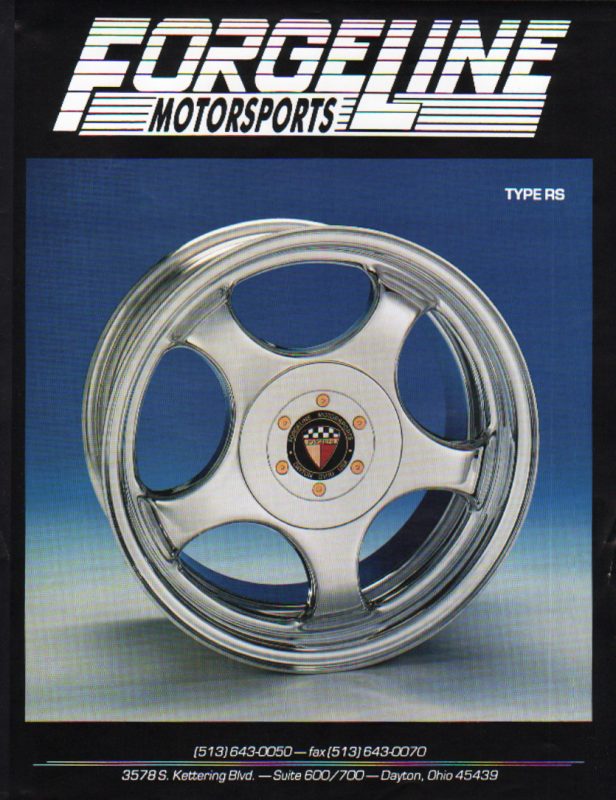 Time flies, when you’re having fun. And the past 25 years have flown by, for the team at Forgeline, as 2019 marks our 25 year anniversary!

Truth be told, when Steve Schardt first made the decision to start building custom made-to-order forged aluminum racing wheels within a small Dayton, Ohio facility in 1994, he never expected his Forgeline brand to become an industry icon. But reports of the death of the American dream are greatly exaggerated, and as it turns out, if you can manage to avoid distractions and stay focused on building a superior product with exemplary customer service, then good things happen. That is certainly true for Forgeline; and now in 2019, we look back at our 25 year history and realize that we’ve come a VERY long way!

So where did the Forgeline story start? Well for the answer to that, we actually need to go back further than 1994. In many ways, this story starts in 1970, the year that Jim Schardt bought the struggling Dayton Wire Wheel out of bankruptcy and began revitalizing it to become an extremely successful company. (Gearheads of a certain age can certainly remember an era when every lowrider either rolled on or aspired to roll on a set of “Daytons”.) Jim’s twin boys, Dave and Steve, were just five years old, at the time, so they grew up alongside Dayton Wire Wheel. You might even suggest that Jim’s growing company was a bit like another brother to the twin boys.

Nevertheless, there are certain realities inherent within a small family-owned business. Cash is tight, time is limited, and the to-do list is long. So to make it work, every member of the family needs to pitch in. And in the 1970s and 1980s, that included the brothers. It is no exaggeration to say that Dave and Steve Schardt very literally grew up working in a wheel factory.

But the Schardt family’s connection to the automobile goes beyond just wheels. Jim Schardt is also an avid racing enthusiast with a long “career” as an amateur club racer with the SCCA and Porsche Club. So very early on, the young Schardt brothers began going to the track and “helping” their dad prep the car and manage the paddock. It shouldn’t surprise you to learn that the boys quickly developed their own love of cars and a passion for road racing. And as soon as the brothers were old enough, they each earned their own competition licenses and began competing alongside their dad. (At one point, the entire family shared the same Porsche 944 Turbo, running it in different PCA classes on the same weekends!)

As they came of age, the brothers’ own racing careers continued to develop. Steve became a club-level instructor with a passion for helping other young drivers learn the tricks. And Dave became an accomplished competitor who professionally campaigned the legendary #94 Hikari Racing Toyota Supra Turbo and the Wheel Source Porsche 996 GT3 Cup cars, in what was then called the Speedvision World Challenge racing series (precursor to today’s Pirelli World Challenge series).

So with a passion for racing and a background firmly rooted in the wheel business, the Schardt brothers recognized an opportunity. By the early 1990s, Dave owned and managed a Dayton, Ohio-based wheel/tire/accessory distribution business called “The Wheel Source”, so he understood the wheel market as well as anyone. His insight allowed him to conclude that, at the time, serious road racers had very few options for custom made-to-order aluminum wheels. Most of those options were manufactured in Europe, and any order required exceptionally long delivery times. The American market needed a manufacturer based in the U.S. who could deliver a quality product with faster turnaround times and a higher level of customer service.

So using some of the knowledge that they had learned at Dayton Wire Wheel, the Schardt brothers teamed up (with some guidance from their dad) and started over again from scratch. Forgeline was born and started producing our very first wheel, the RS, which was a two-piece construction featuring a forged center that was welded into a single spun aluminum barrel. It was a big success, eventually earning its way onto roughly half of the World Challenge field (including Peter Cunningham’s RealTime Racing Acura NSX and, of course, Dave’s turbo Supra).

But the Schardt brothers had grown up with that competitive racetrack spirit. They understood the need for continuous improvement and the desire to do more and to do it better. So they spent very little time patting themselves on the back and instead focused on moving forward to bigger and better things. This proved key, as rapidly-advancing tire technology and more powerful race cars soon demanded stronger and stiffer wheel designs that could withstand higher cornering loads. So the Forgeline team (which itself had grown to include some vital human assets) continued to adapt and innovate, moving all of their modular wheels toward a stronger three-piece construction and later introducing a line of one piece forged monoblock wheels (in which the entire wheel is carved from a massive single forging of 6061-T6 aluminum).

Of course, many of the same racetrack concerns about load ratings and competition-ready performance metrics are shared by some serious street customers too. Porsches, Ferraris, McLarens, Lamborghinis, Corvettes, and an entire genre of low-volume supercars and custom pro-touring muscle car projects are being delivered to their owners with high-tech suspension & braking systems, record-setting horsepower levels, and a new generation of “street” tires that can generate levels of grip that, just a few years ago, could only be attained by the most advanced racing slicks. Many of these vehicles represent six (even seven) figure investments, so their owners and builders, unwilling to risk the possibility of a broken wheel, turned to Forgeline to deliver their proven track performance to the street. This accelerated Forgeline’s appeal to the street market, which today accounts for about 50 percent of our business.

In the last few years, Forgeline innovation has continued, both on and off the track. On track, our one piece forged monoblock GS1R wheel has set the bar at the highest levels of road racing, earning its way onto homologated factory racing platforms including the Ford Mustang GT4, Chevrolet Camaro GT4.R, and Panoz Avezzano GT4. And on the street, we’ve continued to launch new designs and new series, including the highly-acclaimed Carbon+Forged Series which combines precision-machined forged aluminum centers with revolutionary proprietary carbon fiber barrels to deliver a lustworthy combination of technological advancement, cutting-edge styling, and lightweight performance.

Without a doubt, our first 25 years have been a wild ride. And while on one hand, so much has changed, on the other hand, much also remains the same. Every Forgeline wheel is still custom manufactured one-at-a-time, in Dayton, Ohio (amazingly right next door to our original tiny facility – only a few yards away). The company is still 100% family-owned and managed by Dave and Steve Schardt. The entire Forgeline team is still passionate about motorsports and deeply committed to producing the highest-quality product and delivering superior customer service (today, production queues typically range between four to six weeks). And believe it or not, the first three employees to ever work at Forgeline still work here today!

As we look forward to another 25 years of innovation and craftsmanship, we are extremely thankful for the opportunities and good fortune that we’ve enjoyed so far. And to you and all of those who have followed our story, stopped to appreciate our work, or supported our vision in any way, we THANK YOU for making our first quarter century so memorable! 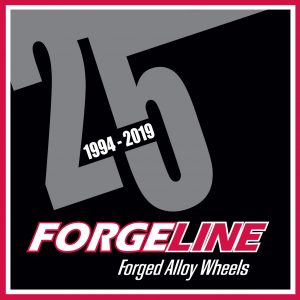 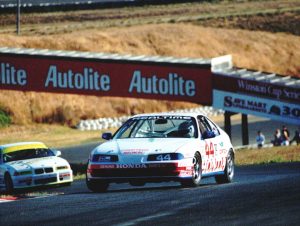 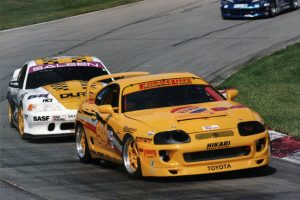 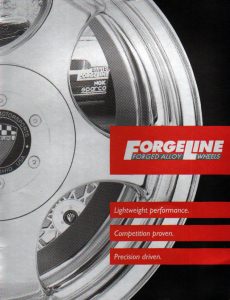 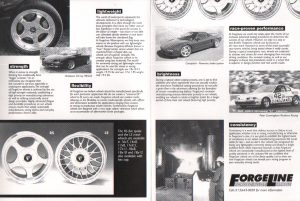 Inside of the very first Forgeline catalog – circa 1995 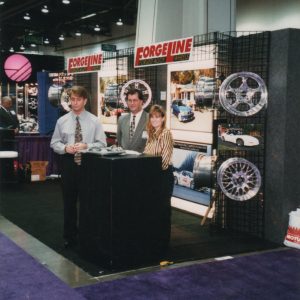 Dave, Steve, and Sherri working the Forgeline booth, at the 1997 SEMA Show